I have no comic today. Too much work going on. That said I will give you a little story.


My dad once took us to Chuck E. Cheese. If you are unfamiliar with that, suffice to say it is a pizza chain that caters to children. Giant rusting animation things on a stage play recordings to terrified 3 year olds, while screaming children run into each other in a maddeningly cheese fueled attempt to get tickets from the various video games in the restaurant, so that they can get prizes. Its a bit like a country fair, except less controlled. Imagine the drifters that are in charge of the rides being replaced by 16 year old without any concern for safety. 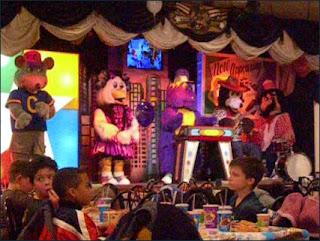 Anyway tl;dr my dad hates these places. Hates them.
One time we were able to drag him to one. He was willing to sit in a corner booth with his feet on a chair, while we ran around screaming and yelling and generally causing havoc, as young boys will.
When suddenly it appears!
Chuck E Cheese himself! To us at least. Chuck was actually there (in costume form)
We came running up to Chuck, then stopped. A cold fear came over us as we noted that this was similar to a clown. Too similar.
He sauntered over, as a 6 foot tall mouse would to our dad.
We grew very quiet.
the mouse then began a weird pantomime of telling my father to take his feet off the chair.
My dad looked up at the giant mouse, and said,
"Hat up, and head out."
The mouse was as perplexed as we were by this phrase. The tone was unmistakable though to our ears. This was the sort of tone dad would use before punishment would occur. 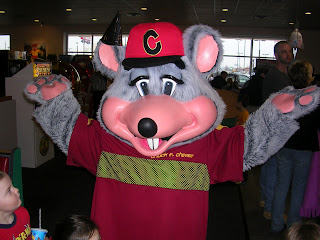 The mouse didn't get it.

Dad began to stand up, and move towards the mouse!
Our fears of a mouse versus parent fisticuffs was unwarranted. The Mouse backed down and stepped away, and my dad simply sat down again.

To this day, I wonder if there isn't some poor man in a Giant Mouse suit fearful of my dad jumping up and threatening him in archaic language again.