In the past I have tried to bring different groups of friends together. I had one group of work friends that were educated and a tiny bit, well, just different from the other group. The other group were partiers, pure and simple. When I attempted to merge the two at a local bar, the result was instant chaos.


Abou5-6 years after that incident, I found myself married, and living the snotty high life in Seattle. 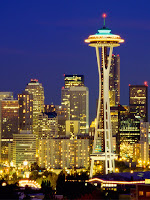 I was a metropolitan now, people.


I again found myself with two groups of friends. One from Boston, again some rowdy folks, but damn great guys. The other group, equally good peeps, were highly educated technology folk, working for telecoms and internet  start-ups etc.

When I attempted a merging of the two again chaos resulted, but at least a slightly more mature repulsion was the result. the two groups just did not party the same way. The tech guys all wanted to sit around and talk, and the Boston guys wanted to party, and if possible see boobs. (doesn't every guy feel this way? regardless of education or social standing?)

I guess what I'm saying (tl;dr) is that if you have two different groups of people that like you, its not gonna be an easy to get them to like each other.