In which a discussion of Men without Hats occurs


My wife and I had a discussion where Men without Hats was on the radio. (specifically "Safety Dance") At a certain point, I shouted, "release the dwarves!"

Now this may have been offensive. I really dont know what they are calling themselves these days. Dwarves, little people midgets, indigenously short. Even though that may be the case, I still know there are dwarves (whatever) in the video. Granted that my wife grew up in a world that rapidly was going tthe way of the "Real World" rather than music video 24-7, but everyone should know that in that video there are fucking dwarves.

This is important. The guy singing has too many scarves, dances with a crazy lady, and is accompanied by a dwarf.
Without any of these key features, the video becomes simply a guy walking through the countryside. And seriously who wants that?

So to honor these brave individuals, these Men Without Hats, I am posting pics gleaned from the video to prove the following facts. 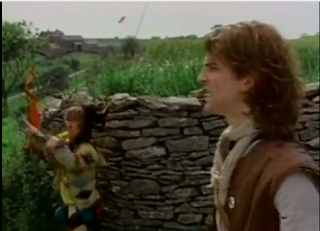 This is not a short guy. He is a dwarf. 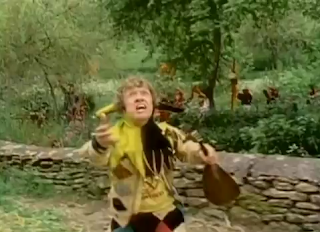 I also think he may have been in Time Bandits (Which should be required watching for all children ages 12 and up, but thats another rant.) 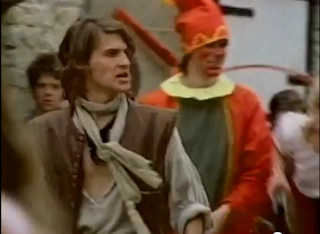 Any time you see multiple scarves, you will realize that this guy is there to do all the ladies. I assume he will leave a scarf behind, as a reminder that they did it with a guy who has way too long of hair. 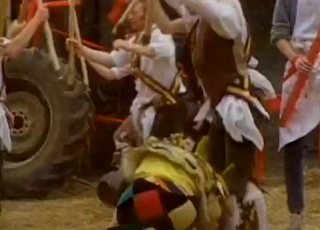 Nothing says eighties music video like temporal anomalies in your time travel. they are singing with synthesizers  dancing in a field, and at a maypole party in a village, all dressed up as villagers cica 1480, but someone forgot to hide the tractor. Whoops who cares, have some more cocaine (says the director)